-On my easel currently: 4.18.19
This little boy is Justin, who is 8yo. He came by as I was walking Flash on our road, letting her graze on the sides as a reward after we had worked. Justin was pushing a very old bike and he approached slowly. He politely asked if he could pet Flash. I said yes. He asked a lot of good questions about horses and I eventually, at his request, hoisted him on Flash’s back and walked them up and down the drive.
What I knew from neighbors’ sharing is that Justin and some boys who also live close by had been bragging to friends that they owned our horses and cattle. It’s one of those cute things children do. I also knew that Justin probably had a rough home life because of things he said to me and things he had told our neighbors. So I gave Justin a ride, and now, he can say he rides the horses.   He was very good with Flash and I got a reference photo for this painting. Flash was reading him. There was questioning and kindness in her expression. He put his head against her without any prompting. A great moment to capture.  It just said everything to me about these horses and humans.

“There is something about the outside of a horse that is good for the inside of a man.”
Horses heal.

Below is a progression. 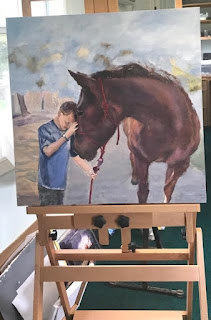 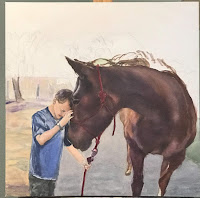 Fall In Pennsylvania:
Leaves in a shallow area of pond near an old spring house. 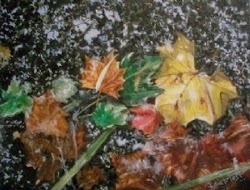 Another work in progress.  Son playing soccer.  This is a blocked in, first layer ready for fine-tuning.  I love to work on action shots and love the intensity on players' faces during crunch plays.  The photo I'm working from shows the players in a postage-sized view though.  A bit of an eye strain, but I'm pleased the characters resemble the real people at this early stage. 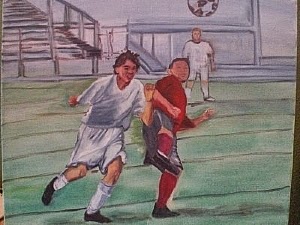